State Governing and Advocacy Association for Contractors, Distributors and Manufacturers of Cleaning and Maintenance Supplies

See What the FSSA can do for you!

The Trouble with Blowers

With all the new technology in restroom hand driers, you might think blowers are more hygienic than a simple sheet of paper. Banish that thought, says Rodney Lee Thompson, a hospital epidemiologist at the Mayo Clinic in Rochester, Minn.

The Trouble with Blowers

Go to any sports stadium and watch people washing their hands in the bathroom, and you'll likely switch to paper, notes Dr. Thompson. "The trouble with blowers is that they take so long," he says. "Most people dry their hands for a bit, then wipe them on their dirty jeans, or open the door with their still-wet hands." Maybe they even decide not to wash altogether to save time.

Meanwhile, time-consuming, loud "blowers turn people off," he says. "But there is no downside to the paper towel, psychologically."

With all the new technology in restroom fans, you might think blowers are more hygienic than a simple sheet of paper. Maybe not. Heidi Mitchell reports on Lunch Break. Even environmental concerns, Dr. Thompson says, are eradicated by the paper towel. "The electric blower uses more energy than making a paper towel," he says.

While air blowers are hands-free, they are loud and time-consuming. Alamy

In June, the Mayo Clinic published a comprehensive study of every known hand-washing study done since 1970. The authors concluded that drying skin is essential to staving off bacteria, and that paper towels are superior to driers: They're more efficient, they don't spatter germs, they won't dry out hands and most people prefer them. (A co-author of the study has served as a consultant for Kimberly Clark Australia, a maker of paper towels.) Dr. Thompson's study was one of the dozen samples reviewed, and he concurs with the recent findings.

Paper towels are faster and less likely to spread germs.

Even though studies have shown that a thorough washing with soap will remove nearly all traces of bacteria, some germaphobes take extra precautionary measures, like using a paper towel to touch the bathroom door or faucet.

Dr. Thompson doesn't think that is such a bad idea. "Remember that some people don't wash their hands at all. So when you turn off the faucet, you contaminate your hands again; then you grab the door handle and you're picking up whatever germs were left behind."

In a dream world, Dr. Thompson says, you'd use a paper towel to dry your hands, open the door with it, then throw it over your shoulder and into the trash. "I personally think that public bathroom doors should open out so you can push them with your thigh," he says. "Or they should not have a door at all, like at airports."

While many manufacturers suggest that an automatic faucet and an air blower solve the problem of bacterial transmission, the opposite is in fact true. Studies have shown blowers tend to spread bacteria between 3 and 6 feet from the device, while faucets hosted a different set of problems.

"In hospitals when water sources are screened for Legionnaires' disease, it has been found that it was more prevalent in the automatic faucets, since that water sits there stagnant for a longer time," he says. It is probably true that the least-used faucet is more likely to pass on Legionnaires, while the most-used toilets are the ones with the dirtiest flushers. So use the end stall and the nearest sink, and always dry with paper. 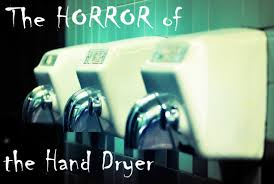 About Us
Join
View on Mobile